About The Site:
Luxor Museum was opened in 1975. In terms of the size in Egypt, this follows to the Egyptian Museum in Cairo. The exhibition method and way of lighting are contemporary and sophisticated, and the collections are also fulfilling, so it can be said that it is a prestigious museum even if it is viewed worldwide. Main exhibits of this museum are artifacts collected in Luxor and its outlying regions. Among them, the notable ones are the exhibits related to King Akhenaten (Amenhotep IV) who was made to be heresy by later Pharaohs, and the seated statue of Hathor goddess discovered in February 1989 in the Court of Amenhotep III of the Luxor Temple (2nd Court) , etc. 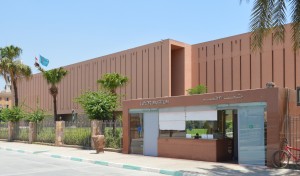 In addition, besides simply displaying the collections side by side, the exhibition method has been devised. For examples, the scene of excavation of many stone statues discovered in Luxor Temple in 1989, and the exhibition of the process of repairing a stone statues which were broken and became a fragment, etc.
When my visit in August 2014, I got a permission in advance to photograph from the Luxor Museum through the Egyptian National Travel Agency before visit. But in April 2016 of my visit, taking pictures was possible if we pay the extra charge (50 EGP).

How To Get There:
The Luxor Museum is located about 800 meters northeast of the main street along the River Nile from the Luxor Temple. From most of the hotels in Luxor City, it is a little far but we can go there by walk.
It is a light red-brown, modern building, so you can see immediately if you look at the picture in advance and you would not make a mistake because LUXOR MUSEUM is written in English at the ticket counter. However, since the front of the museum is regulated so that a car can not pass. If you take a taxi, the taxi takes you to a place on the back street. So you may feel uneasy.
When I visited here in Summer 208, the museum was opened until 10 PM. In Summer 2014, the museum hours were from 9 AM to 3 PM due to probably a sharp decrease of the tourists. But when I visited in April 2016, the Museum was opened twice; 9 AM to 2 PM, and 5 PM o 9 PM.

About The Obelisk:
This obelisk was discovered at the west side of the court between 9th and 10th Pylons of Great Temple of Amun (Karnak) in 1923. This was made by Ramses III [reigned 1184-1153 BC], and its height is only 95.5 cm. Since the bottom part is missing, the original height would be higher than now, but it would be no more than 3 meters considering with the thickness of the top of this obelisk. It's considered that Ramses III dedicated pairs of obelisk for the Great Temple of Amun. But the companion is missing. This is the only one obelisk by Ramses III.
As the interior of the museum is illuminated with light bulb color, the obelisk looks pretty reddish. Because the distance to the wall is too close on the back side of the obelisk, I couldn't take a picture of the back side. The preservation status of the inscription is good, and the hieroglyph remains clearly particularly on the front and right sides.
Each inscription is engraved in one line on each side. When comparing the sides in three directions that I could take pictures, the horus name of Ramses III is by the same notation. But the sentences below the horus name are different on the 3 sides, the right side is engraved with the coronation name of Ramses III under the horus name, and the obelisk is broken under it.
Considering from the notation of obelisk inscription, I don't think that the side currently being displayed in front is the front of the original obelisk. The direction of horus at top indicates that the left side or the back side that I couldn't take picture would be the front of the original obelisk.

In fact, the existence of this obelisk was the springboard I thought that I should record the obelisks including the fragment. Although this obelisk is listed in the wikipedia site, but the ones exhibited in the Egyptian Museum and the Nubian Museum are not listed. This obelisk is only 95.5 cm high and exhibited indoor, and almost half is missing. But the Ramses II Obelisk exhibited outdoor in the Nubian Museum is preserved in good status, and almost perfect. In addition, many larger obelisks are exhibited in the Egyptian Museum. Why is not the obelisks of the Egyptian Museum, the Nubian Museum, and the British Museum written even though the obelisk of the Luxor Museum is listed? I didn't think that it was selected under definite criteria. Rather the listing was in such a state that I want to feel as if Wikipedia authors' mere lack of knowledge [about the obelisk] causes it.
Although I don't know the clear reason, but I assume one of the reasons would be due to the lack of information about the fragments of obelisks in Egypt. Moreover, it is rare that the obelisk of Lebanon is referred. So I made up my mind that I will confirm with my own eyes the obelisks including the fragments that remain in the world, and record of them.

Notes For Pictures:
When I visited here in 2014, it took quite a while to officially obtain a photography permission, but it was changed to permit a photograph if we pay 50 EGP in 2016. However, photography at the Luxor Museum has been prohibited for many years unless special permission is obtained, so I'm not sure how long this policy change of permission will last.