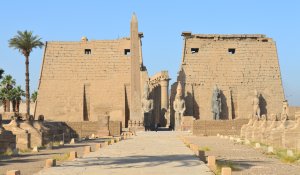 The row columns (Colonnade) can be seen from the outside as the many parts of outer wall of Luxor Temple are lost, so we can see the temple and obelisk over the fence surrounding the temple sites.
The right figure illustrates the restored figure of the arrangement of Luxor Temple. The temple was built paralleled by the Nile, and from the Colonnade of Amenhotep III through the Sanctuary are located on a straight line. But added building which includes the Court of Rameses II is distorted in parallelogram. This was because of the building was added on a straight line of Avenue to the The Great Temple of Karnak.

After entering into the site, firstly there is the Avenue of Sphinx toward the Temple. In the ancient times, the Avenue once connected the Temples of Karnak and Luxor, and about 400 sphinx statues each were placed on the both sides of about 2 km Avenue. When we see the satellite photo of Google Maps, we can confirm that the most part of the Avenue was excavated and the connection to the Temple Complex of Karnak.


After the Avenue of Sphinx, there is a large space, and the Ramses II Obelisk stands left side before the 1st pylon (gateway). Also there are two large seated statues and four standing statues of Ramses II on both sides of the gateway. But all except most right statue are broken.
Through the 1st pylon enters into the Court of Ramses II (also called the first court), but about a quarter of the building has been destroyed and now it is a Muslim mosque. Other parts remain Colonnade and the Statue of Ramses II (picture at left).
Passing through the Court of Ramses II, and after the 2nd pylon built by Amenhotep III, the next is the Colonnade (also called Amenhotep III Colonnade), which has seven pairs (14 in total) of 15.8 m high open-flower papyrus columns. This is a large scale that is comparable to the stone column of the Great Hypostyle Hall of the Temple of Karnak. Here are the seated statues of Tutankhamun and his wife Ankhesenamun, and the name of Tutankhamun has been rewritten to Ramses II. The next of Colonnade is the Court of Amenhotep III (also called the second court), which has 64 open-flower papyrus columns. At the rear of the Court are small rooms leading to the Sanctuary at the rear end.


The impressive one is the Colonnade and the columns around the Court of Amenhotep III. Since the outer wall is lost, the columns can be seen directly. The damaged parts of stone columns are carefully repaired, so it's quite beautiful that the large columns line up neatly. In the night, the first pylon and the Obelisk in addition to those columns are illuminated, so it's also worth to look the night scene.

How To Get There:
Luxor Temple is located along the River Nile, about 400 m northwest of Luxor Station. It would be easy to get there as the most hotels in Luxor City are within the walking distance, and the location is along the River Nile. The entrance of Luxor Temple is in the northeast side of the Temple. Even the foreign tourists have drastically declined now, still many tourists are the area between the Temple and the station as many shops for the foreigners such as MacDonald's.

About The Obelisk:
Rameses II erected more obelisks than any other pharaohs. In fact, 9 obelisks still remain. This obelisk is the largest one among Rameses II' many obelisks which are still standing situation. Also, this is the 2nd largest obelisk in Egypy, following to Queen Hatshepsut Obelisk.
Currently, only the left side obelisk stands in front of the 1st pylon, but it has been once a pair as anothe obelisk was in the right side. As you see the picture below (Northwest side), the foundation stone at right side remains.
In 19th century, Egypt was the dependent territory of Ottoman Turks, the Viceroy named Mohammed Ali controled Egypt. He was not interested in the ancient monuments, and was a person who easily accepts the requirements from France and Britain. After a negotiation, two obelisks in Luxor Temple were presented to France in 1830. But if it's difficult to transport of two obelisks at one time, France decided to carry out the right-side obelisk first. According to the private record by Jean Baptiste Apollinaire Lebas who was a resposible person for transportation, the carrying out was quite hard work, and as a result, the right-side obelisk alone was carried out from Luxor Temple in 1831. Then that obelisk was reerected in Place de la Concorde in Paris in October 1836. Afterward, the France-Egyptian relationship was deteriorated, the left-side obelisk has never been carried away from Luxor Temple. It's said that the person who suggested that if France acquires frrom Egypt, this should be Luxor Temple obelisk was Champollion who deciphered the hieroglyphs.

The hight of this (left-side) obelisk is 25 meters (*), and the right-side, currently in Place de la Concorde is 22.83 meters. Because the height of the obelisks on the left and right are different, the right side obelisk was erected slightly towards the Avenue of Sphinx than the left side obelisk. This is due to the consideration that the height of the obelisks of left and right look like evenly to the eyes of the person who came into from the Avenue of Sphinx.
(*) The Complete Temples of Ancient Egypt, Richard H. Wilkinson.

Each side of the obelisk has three columns of inscription. The horus name of Rameses II is engraved at top. It is characterized by three columns are engraved with different writing ways. Also the writing way of the coronation name and birth name [of Rameses II] are different at the center and both side inscriptions. On the front (northeast side) and back (southwest side) of the pedestal, there are four statues of standing baboons in adoration toward the sun, which is a fascinating and interesting composition. Ramesses II's small obelisk which was found in Abu Simbel Temple also has statues of four baboons. There is commonality as the obelisk of Ramses II.

On the southwest side wall of the Court of Ramses II (the first court), the facade of Luxor Temple at the time of construction with two obelisks is engraved. Normally the pair of seating statues of Ramses II and four standing statues should be facing the front, but drawn sideways following the traditional Egyptian pictorial fashion.

Notes For Pictures:
I visited Luxor Temple at a little later of 2 PM, August 8, 2014. It was 42 degree (in C). Every day in Luxor it is sunny with no clouds at all, the sun ray is too strong, it is dangerous to walk under the blazing sun without water supply. However, due to the lower humidity, if we are in the shade, the sensible temperature drops considerably and we can take a breather. Since the base of the Obelisk of Ramses II was in the shade, I took a break for a while looking at the inscriptions of obelisk. Because it was an extremely hot hour time, there were no tourists at all other than me, in the Luxor Temple.